How to Use a Stitch Marker for Amigurumi 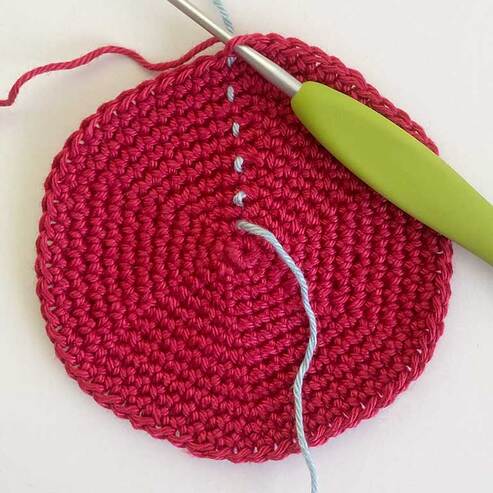 Make life easier with a running scrap yarn stitch marker!
It's so easy to lose count of stitches and rounds when you're crocheting Amigurumi style in continuous rounds. I'm going to show you how to easily keep track by using a running stitch marker made from scrap yarn.

Why use a Stitch Marker? 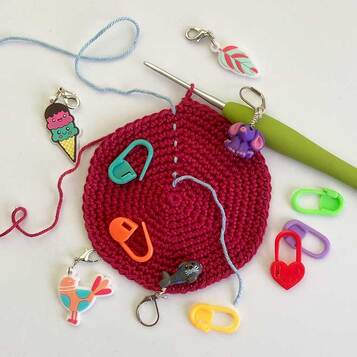 Which stitch marker for which job?
Stitch markers come in all shapes and sizes and are used in lots of ways when making Amigurumi - you may see "pm", meaning "place marker" in a pattern to mark where limbs or eyes should be attached for instance - but the main reason for using one is to keep track of the rounds worked so you know where you are in a pattern.​

​When crocheting Amigurumi style in continuous rounds, there's no seam, which means there's no way of telling where each round starts and finishes.

If the phone rings, or someone asks you if you fancy a cuppa mid-round and you lose track of how much of that round you've completed, if you have a stitch marker in place marking the end of the previous round, you can just pull out the stitches back to the marker and start that round again.

Why's a scrap yarn stitch marker better than a plastic one?

I'm not knocking plastic or metal markers, they're great for some jobs - if you do need to mark limb positions for instance, they're perfect - because they usually lock. They'll stay securely in place until you've completed the whole piece and are ready to join the limbs on. 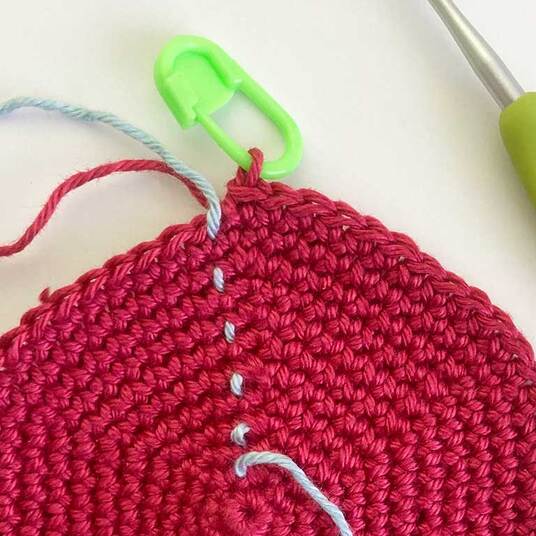 They're not so good for marking the start and finish of rounds - they can be annoyingly fiddly to move up after each round and stopping to do that every time can spoil the flow of your crocheting. If you're new to making Amigurumi, putting the hook and yarn down to move the marker every round can make for uneven tension.

If they're wider than your yarn they can also leave a row of noticeable gaps where they've been inserted, spoiling the look of the finished piece.

The big plus of using a scrap yarn stitch marker is that it stays in position until you've completed the whole piece, marking the end of every round, not just the last one. It's sometimes referred to as a "running stitch" marker as it creates a running row of stitches on your work.

Having the end of every round marked is useful if you notice a mistake several rounds back. If you've only got the end of the last round you worked marked with a plastic marker, you'll have to count every individual stitch back to where the error is, to work out the round it's in and where in that round it is.

With the row of running stitches in place, you can quickly pull out the rounds back to the start of the round the mistake was in. You can easily count the rounds up the running marker from the start of the piece to work out where in the pattern you need to start working from again.
​ 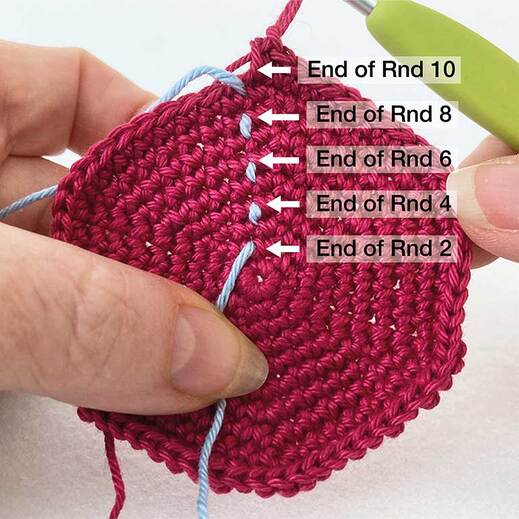 What to Use as a Running Stitch Marker

If you're desperate, any bit of yarn will do but if you have a choice…

How to Use Scrap Yarn as a Stitch Marker

​I recommend working the first two rounds of a piece before you insert the marker for the first time - it's a bit fiddly to put it in place after just the first round. The piece I'm working on in the photos below is increasing by 6 stitches per round, so at the end of Rnd 2 there are 12 stitches.
​ 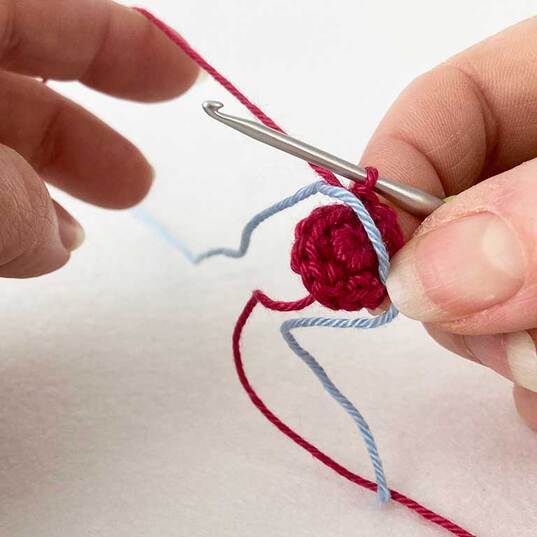 Fig 1: Placing the stitch marker at the end of Rnd 2
Lay the waste yarn across the work, with a short section of the waste yarn hanging down over the front of the work and the bulk of it trailing away from you behind the work. Where it passes over the work, it should be sitting immediately to the left of the last stitch of the second Rnd and the working yarn should be to the right of the waste yarn - if you're a right handed crocheter. (Fig 1) 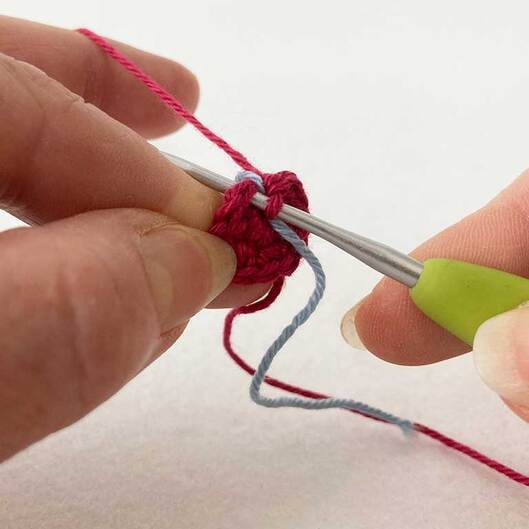 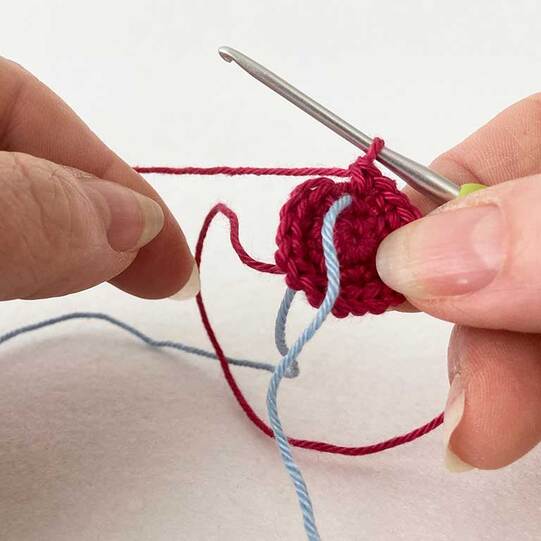 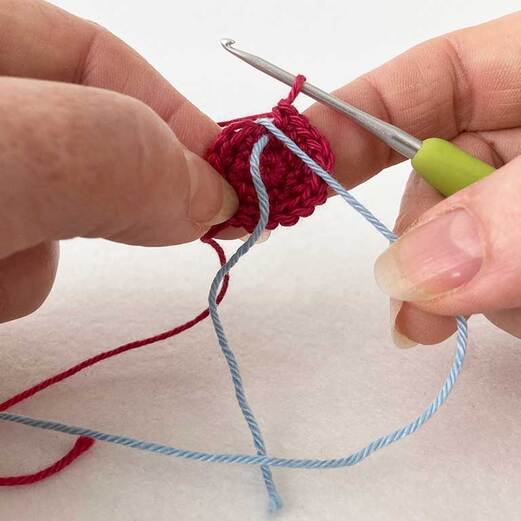 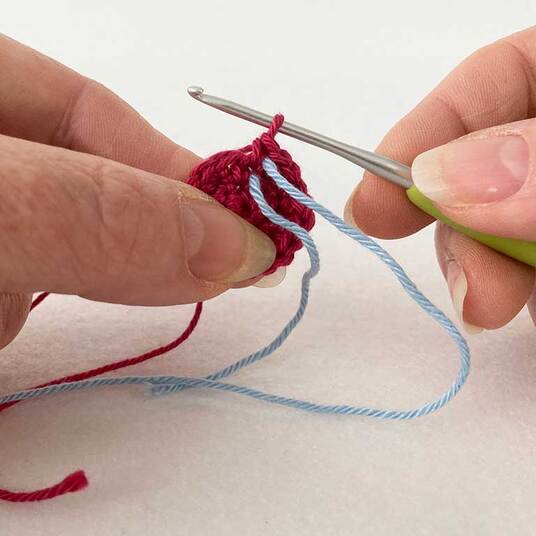 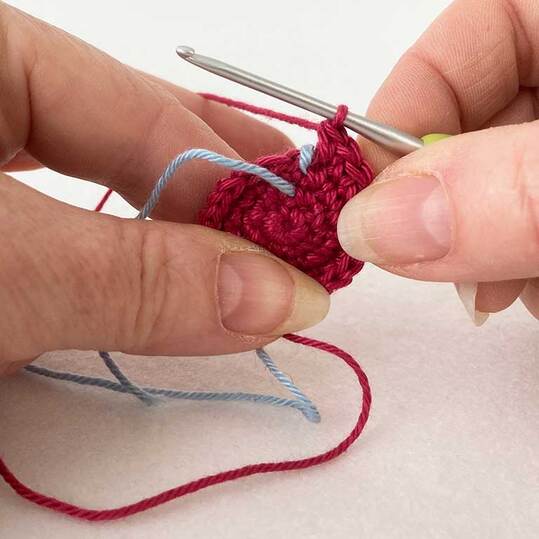 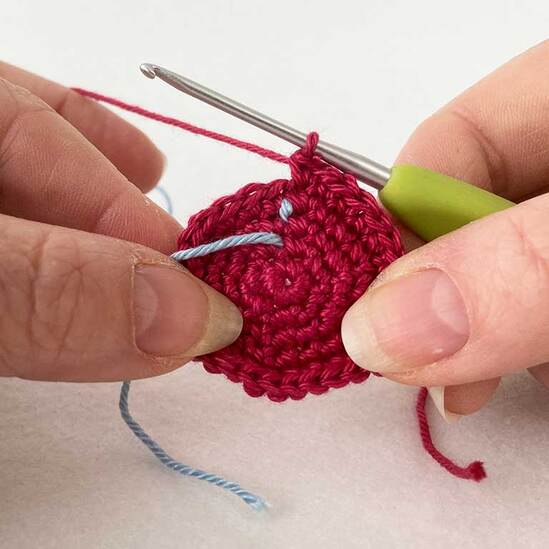 Top Tip: When you get to the end of a piece - don't pull the running stitch marker out straight away - it can be useful when you're sewing your Amigurumi together if the pattern tells you to join pieces in line with a certain round - you can count up the side of the marker quickly to find the right round. 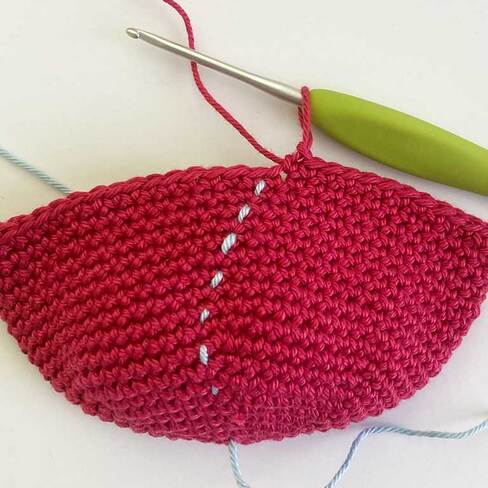 Don't worry about the running stitch line veering off to one side!
You may find that the running line of stitches created by the marker is diagonal when you're crocheting several rounds without increases- this is normal and comes about because, when crocheting in continuous rounds, the stitches do not sit directly on top of each other but are offset slightly to one side. If you're right handed the line will move diagonally to the right, if you're left handed, it will move to the left. Once the marker's removed you won't be able to see where the rounds end.
If you've found this tutorial helpful you may also like...
​