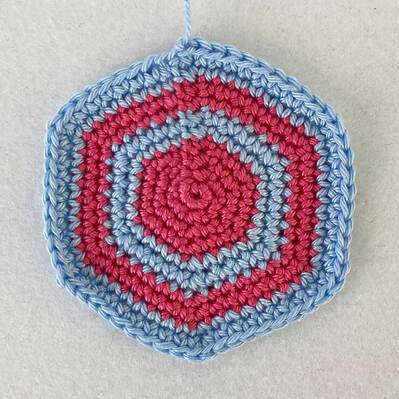 Jogless Stripes - easy once you know how!
I'm going to show you how to do an invisible colour change in Amigurumi - without the frustrating "jog" or "step" between colours. This is achieved by working in joined rounds rather than a continuous spiral.

This tutorial shows you:
Although this technique is easy once you've got the hang of it, if you're very new to Amigurumi Crochet, you'll get better results if you make a few pieces first using the conventional continuous spiral method and don't worry about the "jog" between colours just yet. Once you're comfortable with the basics and your hands are used to handling the hook and yarn and have developed muscle memory for the actions, then move on to techniques like this to improve the finish of your makes.

Basic Pattern
​
Rather than jumping straight into working the technique on an Amigurumi project, I suggest you take the time to have a quick practice first by crocheting along with me through the tutorial.
​
Pick a couple of different colour yarns - make your life easy and chose the same weight yarn for both,  ideally in light (but contrasting) colours- and grab a hook.

​My example was created with 4 ply (US Sport) Cotton and a 3mm hook.
​
Top Tip: Don't go too small on the hook size while you're practising - it's easier to see where (and where not) to insert the hook if your stitches are a little bigger - you can go smaller once you've got the hang of the technique.
You'll be working the pattern below. It uses UK Crochet Terms. They are not the same as US Terms. UK dc and US dc are two different things, if you're used to US Terms you'll need to work sc - single crochet - everywhere  this pattern says dc - don't worry, I'll remind you as we work through the stages.
​
Joining the First Round 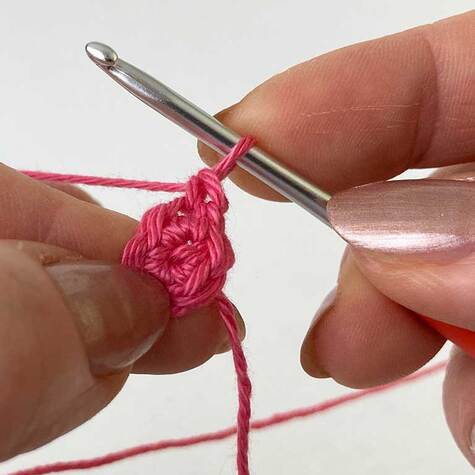 Fig 3: First completed stitch of Rnd 2
To start the second round, you will now work the first dc (US sc) through both loops of the same first stitch of Rnd 1 that you've just worked the slip stitch into. (Fig 3). Make this first dc (US sc) and then, as the instructions are telling you to make two dc (US sc) in each st around, make the second stitch by working through both loops of the first dc of Rnd 1 too.

To recap - you will now have worked one sl st in the BLO and two dc (US sc) in both loops of the same first dc of Rnd 1.

To complete Rnd 2, work 2 dc (US sc) in each of the remaining 5 stitches, to give a total of 12 stitches at the end of the round. 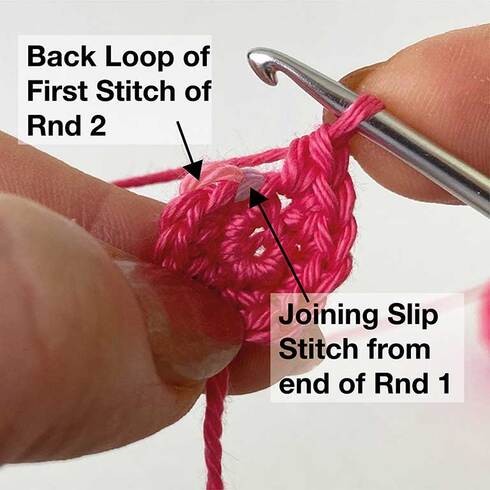 ​As you can see from Fig 4 above, the slip stitch sits a little lower than the rest of the stitches in the round, which helps you identify it. If in doubt, count back around Rnd 2, to work out which is the first stitch.

Don't cut or fasten off COL A - in this instance it can just be carried up on the back of the work.

Yarn round hook with new COL B and pull through to complete the last dc (US sc). (Fig 6) 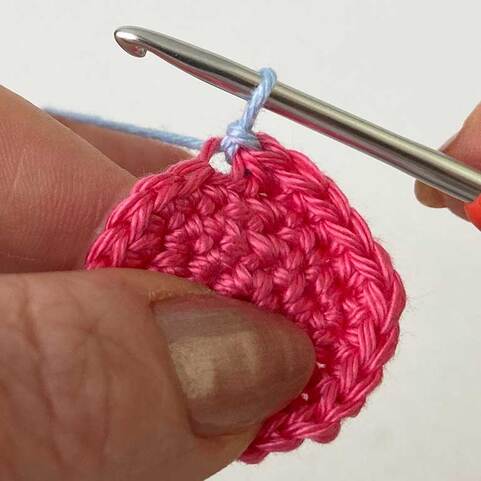 ​Work the rest of Rnd 5 - at the end of the round it's easy to identify the slip stitch from the previous round as it's the first, lower stitch in COL B. (Fig 9)

As you have done from Rnd 2 onwards, skip over the slip stitch from the previous round and join with a slip stitch in the BLO of the beginning dc (US sc) of Rnd 5. 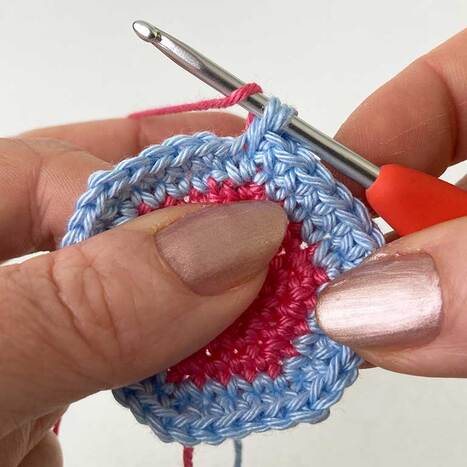 Fig 10: Pick up COL A again to work the last yrh of Rnd 6.
Work the first stitch of Rnd 6 into both loops of that same beginning dc (US sc) of Rnd 5 and then work the rest of Rnd 6 up to just before the last yrh (US yoh) of the last stitch. You are now changing colour again, so let go of COL B and pick up COL A from the back of the work (Fig 10), wrapping it round the hook and pulling it through to complete the stitch.

As you have done from Rnd 2 onwards, skip over the slip stitch from the previous round and join with a slip stitch in the BLO of the beginning dc (US sc) of Rnd 6. 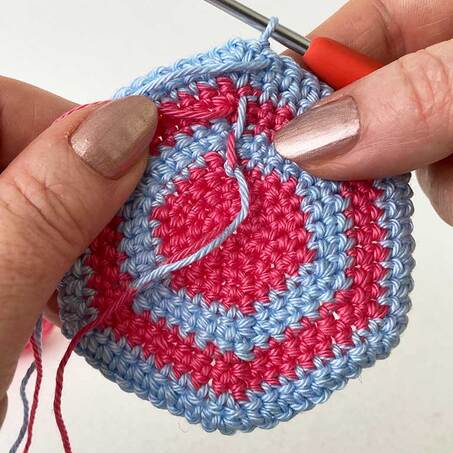 Fig 13: The back of the piece
If you turn the piece over and look at the back you can see where the different coloured yarns are carried behind (Fig 13) - this is fine for most amigurumi pieces as they are 3D shapes where you can't see the back of the work as it's inside the piece.

If you are making a piece where the back will be visible you will need attach the yarn by tying it onto the working yarn as you did for the first colour change in this tutorial and then cut the first yarn - making sure the yarn tails on both colours are long enough to weave in so the front and back both have a clean finish.
​
Using this technique for a single colour change on a continuous spiral pattern

​I wouldn't use all joined rounds for a piece where there was just one colour change (for instance between a hoof and leg) as generally then the single jog is actually less noticeable than a seam would be running up all the rounds of a single colour section.

Most of my free patterns are written using the conventional continuous spiral amigurumi method, without joining - just to make them as user friendly as possible to less experienced crocheters just getting to grips with Amigurumi - and so there are 'jogs" between colours.

You can use the joined method on most conventional Ami patterns to give you invisible colour changes - see the info in the box above.

I would experiment with it for something where there were several colour changes - why not try it on my Zebra pattern and see the difference it makes to your finished piece!

Or check out the Red Panda pattern - the Tail part of the pattern is written in joined rounds to give his tail lovely smooth stripes!