Crochet Christmas Wreath
How to Join the Reindeer's Antlers 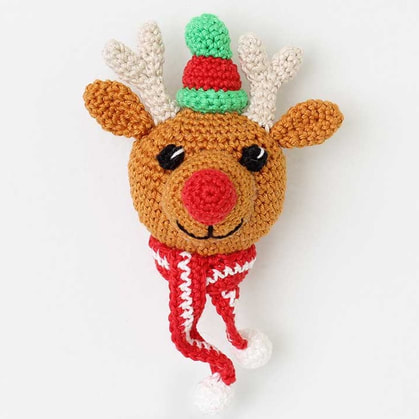 A quick tutorial on how to crochet the tops of the Reindeer's Antlers together.

Here's a recap of the pattern for making the parts of the Antler:
Reindeer's Antlers - make 2
Each is made as two separate parts - Part A and Part B - from the top down and then joined together to make an antler. Do not stuff.

Part A
Rnd 1: With COL C, working into a magic ring, 6 dc. 6 sts
Rnds 2-4: Dc around.
Fasten off.
​Part B
Work as Part A but do not fasten off at the end of Rnd 4. Continue on to Rnd 5 below to join the two parts together.
Rnd 5: 3 dc in Part B, then, starting in next unused stitch after last stitch of Rnd 4 on Part A, 6 dc, then, starting in next unused stitch on Part B, 3 dc. 12 sts.
Don't worry if there's a hole where the two parts join - this is normal and can be sewn closed using a length of COL C and a yarn needle once the antler is finished.
Rnd 6: 6 dc2tog. 6 sts
Rnds 7-10: Dc around.
Fasten off. Leave a long yarn tail to sew the Antler to the top of the Head once you've made all the parts.
UK and US crochet terms are NOT the same - this is written in UK terms. If you're used to working in US crochet terms - substitute "sc" for "dc" in the pattern above.
Let's break that down step by step... 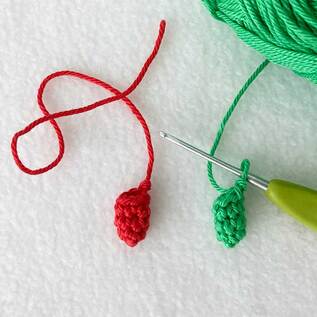 Crochet Antler - Fig 1
Before we begin... You'll be making all the parts of your Antler in a Beige yarn or something similar - I've made the tops of my Antler for this tutorial in 2 different colours so help you see which part I'm working into. Let's call the fastened off Red one Part A and the Green one - which is still attached to the ball of yarn - Part B. On both I've tucked the starting tail down inside the Antler out of the way. These are the parts you'll have just before you start Rnd 5. 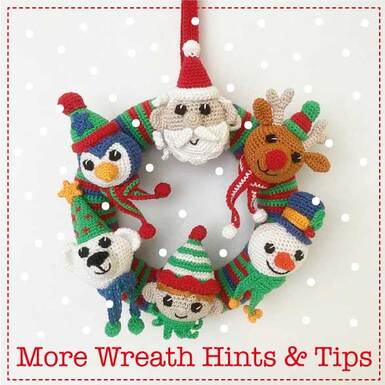