mycrochetchums
#lockdownamichallenge - No 41 - Monster
Scroll down for more pictures!
Yarn
Aldi So Crafty Knit & Purl Amigurumi Yarn - described on the box as "Light" - Equivalent to DK.

A cotton yarn works well for Ami as it gives good stitch definition and creates a firm structure so body parts hold their shape well. Any cotton/cotton mix DK should give similar results.
​
Hook
3 mm
​
Other Supplies
Yarn needle, toy stuffing, stitch marker/waste yarn.
​
Tension
Tension is not critical for this project but stitches should be tight enough to avoid stuffing showing through.
​
Size
Approx 16cm (6.5in) from top of head to toe.
​
Pattern Notes
Unless otherwise specified this pattern is worked in the amigurumi style, in a continuous spiral without slip stitching or turning chains.

The Monster is made of multiple separate pieces sewn together. Unless otherwise stated, finish each piece by pulling the yarn through the last loop and leave a long tail for sewing. Any loose tails at the end can be easily woven in.
​
Increasing and decreasing
The “invisible” techniques below are recommended to give your amigurumi a neat finish:

Invisible decrease: Insert hook in FLO of the two stitches to be decreased, yrh, pull through both front loops, yrh, draw through two loops on hook.
​
UK Crochet Terms - Abbreviations
This pattern is written using UK Crochet Terms - they are NOT the same as US ones - please familiarise yourself with the UK terms to avoid your character’s shape distorting!
The “dc” abbreviation used in this pattern refers to UK double crochet. The equivalent stitch in US terms is single crochet - if you are used to US patterns you need to work single crochet everywhere this pattern says “dc”. If you work US dc (equivalent to UK Treble) the finished item will be elongated and the stuffing will show through.
​
If you are used to working in US Crochet Terms you can find a conversion chart HERE.
​
If you are unfamiliar with any of the terms used in this pattern, you can find a chart of the UK Crochet terms used HERE.
​
Body
Worked from bottom up.  Stuff as you go.

Fasten off, weave in yarn tail.
​
Right Eye Stalk - make 1
Worked from the top down.

Left Eye Stalk - make 1
Worked from the top down.

​Fasten off.
Arms
Make one each in CC2 and CC3.

Fasten off.
​
Spots - make 11
I’ve left the colours up to you for the spots - it’s a great way to use up odds and ends! I made 3 each in Lime Green and Bright Pink, 2 each in Blue and Duck Egg and 1 in Purple.
Rnd 1: With your chosen colour and working into a magic ring, 6 dc, sl st in first dc to join. 6 sts


Fasten off.
​
Making Up
Using the photographs as a guide, pin the pieces together first, checking from all angles to make sure you’re happy with the positioning, then use the long yarn tails or a length of yarn with a yarn needle to stitch the pieces together.

Sew the Eye Stalks to the top of the Body set back a little  - the back of the stalks should sit roughly in line with Rnds 19-20 of the Body.

Sew the Arms either side of the Body, sitting roughly in line with Rnd 13 of the Body.

Sew 3 toes onto the front edge of both feet. Attach the tops of the legs to the bottom of the Body roughly in line with Rnd 6 and set forward so the Monster can sit down.

Sew the Spots on to the Body, leaving space to embroider the mouth.

Sew the Pupils onto the Eye Balls - one off-set upwards and the other down-wards to give him a quirky look.
​ 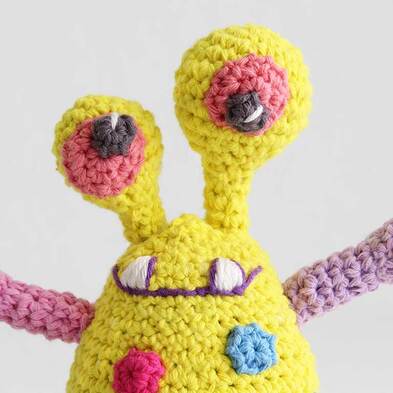 Embroidered Details
Using a length of CC5 and a yarn needle, embroider the Monster’s smile roughly in line with Rnd 18 of the Body - see photo on following page.

Use a length of CC6 to embroider two teeth pointing upwards from the smile and then outline these with CC5.

Use CC6 to embroider a single stitch highlight on each Pupil.

All done!
​
​Terms of Use
I am happy for you to donate, gift or sell any of the my crochet chums you make if you are an individual crafter - please credit mycrochetchums.com as the designer.

If you do wish to sell your my crochet chums, it is your responsibility to ensure that the finished item complies with the relevant toy legislation in your country.

Please be sure to use toy grade stuffing and do not add buttons, bells, ribbons etc that could be a danger to small children.

The patterns are copyright protected and are not for commercial use. They cannot be sold, transmitted, distributed or reproduced in any form or by any means. I’ve worked hard to create the designs - please don’t sell my patterns - it’s just plain mean!
About mycrochetchums
I started mycrochetchums at the end of 2020 to give me something to focus on during lockdown and to make creative use of a box of Aldi Amigurumi Yarn that was an impulse purchase I was feeling guilty about!

​I’m loving creating these cute characters and sharpening my tech skills in the process as I wrangle with managing a website and social media.

If you have any questions about any of my patterns (or any other ami you may be working on) please email me at: pia@mycrochetchums.com - I’ll do my best to help!